Get fresh music recommendations delivered to your inbox every Friday.

Rose of the Monolith 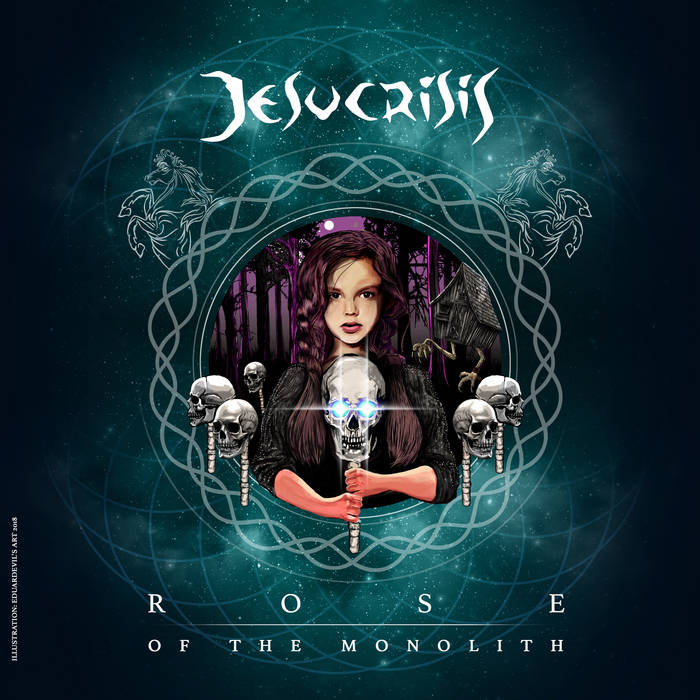 "Rose of the Monolith" is the announced single off the forthcoming album of Jesucrisis, w/special guest guitarist Jay Ravine of The Flatfield (Finland). More info on the collaboration and the story behind this song found beneath credits, below.

"Rose of the Monolith"

In the Wintertide of the forest on the hill,
advancing on the ashes of the burning scorched earth,
A kokluska traverses in the cold of the wind chill,
noticing the cabin of the witch

Dominated by suffering of flogging
The hungry doll of Vasalisa spoke...

From the eye socket of the skull, the light of the candle came out, raising fire to hostility, that those red eyes incinerate...
The riders white, red and black, from Jaba Yaba*...
Primitive views of nature (echo)...

Conflict between sunlight and the storm in the dark clouds,
Submission to force and independence,
"Feminine savage" principle that Vasilisa rescued,
Grows in the night, shelter of the Sun (echo)

The simple connoisseurs of the spells act on Buyan,
through the word of the symbolic reflection of the island to reality...

The wolf to which the sorcerer appeals...
We see the wolf, which he'll become

Conjure them or choose them
with a conscious act of imagination

In Buyan exist our sorrows, and our hopes,
and our spirit (echo)

more of Jay's work can be heard in his band The Flatfield, found on Bandcamp

In Slavic folklore, Baba Yaga* is a supernatural being (or one of a trio of sisters) who appears as a deformed, ferocious-looking woman. Baba Yaga flies above and dwells deep in a primitive house of the forest... "Rose" was conceived by Vladimir shortly into his first winter in Pennsylvania with Lisa. Vladimir wrote lyrics (as well as 3 bass lines) that bowed to this famous folktale, especially inspired by the magical illustrations of Ivan Bilíbin, who portrayed the candle in eye-sockets of skulls held up by posts and carried into the forest by innocent young Vasilisa in the tale. Captivated by the concept of an innocuous object persisting next to a monumental figure (Vasilisa to Baba Yaga), Vladimir imagined a small flower against towering stone... hence the song name. Buyan, referenced at the end of the song, is described in medieval Russian books as a mysterious island in the ocean with the ability to appear and disappear with the tides. Three brothers—Northern, Western, and Eastern Winds—live there, along with the solar goddesses.

Jay Ravine and the guys in The Flatfield collaborated with Lisa on a song that will later be released in '19, and met her when she herself traveled to the Lumous Gothic festival in Finland in 2017. Soon thereafter, abreast of her travels to Chile, Jay soon became a good friend to not only Lisa but also Vladimir. It was Jay who approached Jesucrisis with the idea of some sort of collaboration, just as Vladimir was getting used to northern hemisphere winters. This song seemed the perfect vehicle for the cross-continental collab.


VIDEO of Rose of the Monolith released as a Premiere on Terra Relicta dark music webmagazine 2/23/19: www.terrarelicta.com/index.php/featured/exclusives/10207-jesucrisis-exclusive-premiere-of-new-video

Video on youtube, including phantom horseman footage from “Dr. J” in Finland: youtu.be/2MnBivD54cY

Bandcamp Daily  your guide to the world of Bandcamp

Damu The Fudgemunk shares his recent collab with Def Pressé, plus jams from Common and more